Having a Generous Heart

“As Jesus looked up, he saw the rich putting their gifts into the temple treasury. He also saw a poor widow put in two very small copper coins. “Truly I tell you,” he said, “this poor widow has put in more than all the others. All these people gave their gifts out of their wealth; but she out of her poverty put in all she had to live on.””‭‭ Luke‬ ‭21:1-4‬ ‭

Renaldo pulled up his van at Westminster Thursday to come to the food pantry. I came over to help load some groceries in his van and give him one the of sack lunches that we pass out. I couldn’t help notice his front windshield was completely shattered. He had little visibility and it was dangerous, let alone illegal to drive.

I asked Renaldo how it happened and he said the hood flew open while he was driving and broke his windshield. Fortunately, he was able to avoid a bad accident.  Renaldo told me that he had been pulled over by the police and warned that he had to replace the windshield or face a fine. But he had no money since he was out of work.

Jesus speaks often in his parables and stories about giving to those in need. In those days the poor had no government welfare programs. They relied on the generosity of the wealthy. Jesus shocked his listeners with his reaction to a poor widow who gave away the little she had.  She had a heart of generosity. She couldn’t hold on to what she had because she knew others needed it more than she did. She also felt assured that somehow the Lord would provide for her. What amazing faith!  Jesus said that the poor widow was more generous than the wealthy who gave out of their great wealth. Jesus zeros in on the value to be generous with whatever we have.

America is the richest country in the world. But we have millions in poverty. America has the wealthiest churches in the world. But we still have so many living in poverty.  Since the 1960’s the government has spent 19 trillion dollars on ridding poverty. Even with all this money, we still have the same or higher percentage living in poverty as ever. The welfare system hasn’t worked. This is where the Church needs to provide what welfare programs can’t provide. The Church brings love, care, and a genuine heart for both the physical and spiritual needs of people.

I could not just give Renaldo the groceries and sack lunch and send him on his way. We drove to an auto glass repair shop and replaced his windshield. He couldn’t believe that someone would do this. As I waited with him while they worked on his van, I listened to his story and encouraged him about his faith in God’s love. We had a blessed conversation.  With his van’s windshield replaced, Renaldo could get back to work and drive to his job. He was so grateful for this help.

Because of the generosity of our donors, we are blessed to assist people when they’re faced with a financial crisis and don’t have the means to provide for themselves. We are a small ministry but we give what we have. We are grateful to those who support CCDC and allow us to serve those in need. 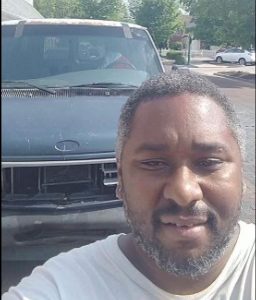 May God’s Peace be with you,